In memory of a true visionary and good friend. 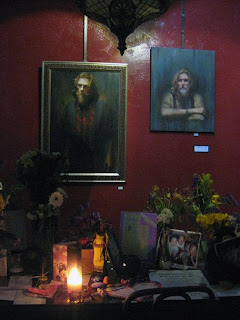 Bob passed away on Saturday February 14, 2009.
He was a huge inspiration to me and so many others.

He will truly be missed. 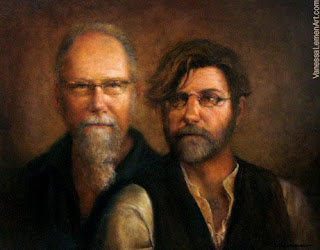 Portrait of Keith and Bob, August 2006
Bob and Keith posed sitting together on the stage at E Street Cafe, for a painting demonstration I did on a Sunday afternoon. With Bob on a stage, and people coming and going in the café, it was difficult to keep this man still – which was the case all of the time anyway, but particularly apparent when he needed to be sitting still in front of me. He would see friends and jump up to run over and hug them. When he felt his eyes getting heavy, he quickly got behind the bar to make us all a special concoction ala coffee-Bob-goodness. The man was non-stop – a ball of energy. And his energy was positively contagious and addicting. 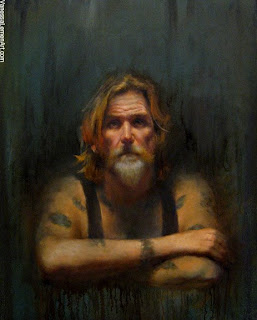 Portrait of Bob, January 2007
This pose was set up to show Bob’s tattoos, because each one has its own story. The furrowed brow became my focus, though, and during each 20-minute increment of the pose, I would paint in a different area until the furrow came back to his forehead. At the beginning of the pose, he was relaxed. But as the minutes started ticking away, the tension in his brow would build. His wheels were constantly turning. When Bob sat during these hours, his gaze was fixed on a painting of a darker clown character on the wall across the room that I had done called The Muse. He asked who she was, and said he wanted to meet her. I told him she was in my head, and was part of a body of work I had created called the “Refugees from the Entrenched Attitude Society”. He insisted that he should be a member of this group. “Maybe I could be the Manic,” he said. And that’s how Bob the Manic came to be. 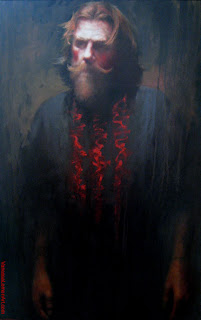 Bob the Manic, October 2007
This painting is a brilliant example of a combination of two souls captured completely in their element. If ever there were a true show of method acting, this was it. Bob was The Manic. He dressed and acted the part, having also painted his face with white and red makeup. His passion gave me freedom to be - just to be – and to paint while being. Which in essence, is my most favorite place to be most of all. We didn’t do much talking, but it was like we were having a very long, deep conversation in which we got to know each other very well… or at least, when it became understood that we were so very much the same. 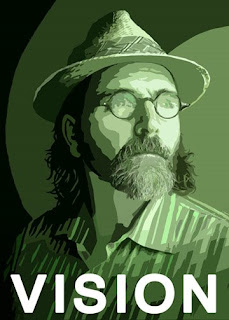 Bob for City Council poster, October 2008
This poster was done very last minute. He proposed the idea to me, needing it yesterday. He came by the studio, and we snapped some photos with natural light. The graphics were pretty straightforward from there – made green to encapsulate his quest for environmental goodness. This one particular pose exuded “Vision” and Bob was a true visionary. He had wanted to be elected so that he could make a difference, and was tremendously disappointed by not getting elected. Maybe what he didn’t quite understand was that he was already making a difference.
Posted by Vanessa Lemen at 12:23 AM

Thanks for posting these. I'm sad now, but it's a good kind of sad.

Bob was such a presence. He just WAS, all the time. Like you, we need to learn to BE like he did.

I love your portraits of him. Seriously brilliant work with a very inspiring subject. 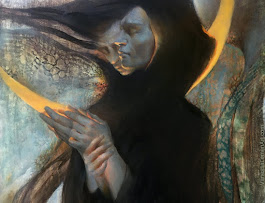